I was wondering about what to post on my way back home, but i was sure about this title(showing gratitude) after this day 15th NOVEMBER 2005 where i had my first AMATH paper.

My fellow classmates, would know my standard in this subject( sounds as if its my best). In fact, i have never had a PASS in this subject since the 2nd term in my Secondary 3 year, right till my prelims, i was still failing...badly...

In contrast, today when i took the paper, the feeling was completely different. Usually, my mine would be messed up with different wrong methods to attempting the question. However, today i know i knew the way to do it. Even when i encountered a question which i'm not sure of how to do, i calmly proceeded to the next question, feeling the composure. I hope the results for this subject would be positive when i'm recieving it next MARCH.

But how have I made this improvement? Obviously someone gave me aid. Initially, it was my tuition teacher, however after he opted for a change in his occupation, he became very busy and had less time to look and scrutinise at my work, therefore he didn't know that i was not doing the work he assigned and this was the reason why i had not made any improvement in the past year. Nevertheless, one would still have their teacher, however my teacher placed her trust in me to do my own studying, as she had faith in my aptitude, i failed her. I did not have the discipline to do my ten years series, my ten years series would certainly fetch a good price in the 2nd hand brash basah complex, it still looks DAMN new. Here came my saviour 2 weeks before the 'O' levels. He is a friend of mine who is extremely proficient in the subject of mathematics, he rendered aid to me unconditionally... OBVIOUSLY I've GROWN under his help, as i felt that the paper was now rather managable.

Now, although I said it was unconditional, i felt quite bad as he spent lots of his time with me, going through things which he was more than familiar with. We spent many days and nights together( uh, not physically) ploughing through questions and concepts. I had many of my doubts cleared, and finally had the chance practising. I really do not know how I should show appreciation for his efforts... It would definitely be something 'special' ( not what my friend got(kiss) as i mentioned in the post TAKING INITIATIVE though). But i wouldn't mind if he requested( haha), i'm not a gay, but i'm really serious in expressing my thanks to him as he really help me lotsss. Maybe, I would have better ideas soon, please wait my friend. 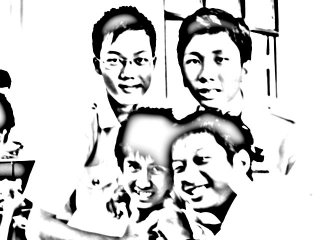 Actually, why are people so keen or for most people keen in showing gratitude towards others? Is it the nature of huamn beings or it just happens to some individuals? I really have no idea man. But seriously, you will feel much better saying a word of thanks to your teacher, parents, friends, for whatever they have given you. I'm not talking in the aspect of KARMA or what, but both parties would definitely feel better, as probably you show that you appreciated his/her efforts.

"Happiness cannot be traveled to, owned, earned, worn or consumed. Happiness is the spiritual experience of living every minute with love, grace, and gratitude."
Denis Waitley