What Fate Really Is

Oh wells, today met Siwei at city hall. Helen who has never ever i swear in my life or rather of my knowledge never met her in person before. For just a moment while i was trying to get my brunch at some donut joint, she spotted her. We simply walked past these stalls, me being ignorant to things that doesn't really concerns me, didn't see Siwei but Helen saw her! And so oh yes.

Its fate as simply moments or rather 10 minutes ago, i was telling Helen or rather maybe the day before i was telling Helen that why should i be the one to arrange/decide on this 'outing' which has got nothing really to do with the other parties.(Okay quite bad to say other parties) Moreover, I'm not the one who's not available and where i don't even know why the other person is not available. So why am i being called a 'joke' jokingly by Siwei! No never will i decide and choose the day to meet, and maybe I'm willing to forsake the chance to meet Siwei. A really nice person i thought and still think she is. I thought the matter was trivial after all.


But once again, as I'm all pissed off the day before. I met her in person earlier today. And all the angst were gone. Why, simply because i know she's not the one blah blah and she's just too happy-go-lucky to feel how serious i treat this whole small incident. Maybe until she reads this article she would never know. Anyways, I've already met her though no long conversations etc. its made possible. That's what fate really is. 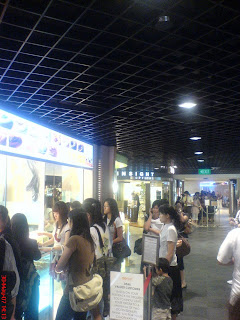 Back to today. As well, i was there to settle my brunch but i got put off by this really long queue which stayed the same even after i finished the food i bought directly opposite this stall. You may want to notice the queue which extends beyond the background. That man in the background if you would notice with a tie, stood there probably even before I've reached. This is not fate haha. But i would appreciate if anyone gets a donut specially for me from there =p, just joking. 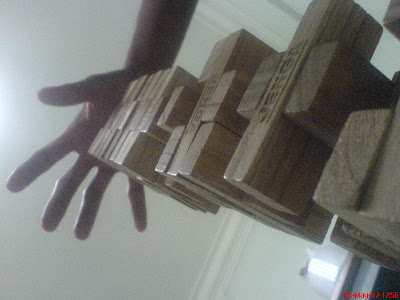 Anyone, what do you read from this picture?


It means something but nothing to me at the moment. You can never know what a person thinks, you need clues, hints, something before you 'understand'. You understand when its a conversation, reasons thrown subtly here and there. You'll never understand with no verification. Never guess, or you may just end up being a fool. I can't fathom what anyone is going to think, so can anyone of you? Tell me if you can, you must be divine.

*TO TELL YOU WHY YOU SHOULD ACKKNOWLEDGE ME. (If you happen to read this)
Answer:SIMPLY BECAUSE I'M YOUR BROTHER.
Posted by Cheung at 12:09 AM