It was end of school, had a somewhat okay day, which means nothing too bad or nothing too good happened. Physics tutor had some problems about controlling his temper although sometimes we were at fault, nevertheless i think its simply not right to slam things. After that went better, since according to my classmates i was the only one who passed the Econs test, a mere 'D', so wasn't really too happy about it. But at least it was not failing. So some good things some not so good things during curriculum time.

Lined up for PE, didn't have to go. So changed into boots and warmed up for training. It all started well until coach decided to work with possesssion in breaking down attack, those Arsenal type of attack, but with more switching, perhaps like the Spanish League. Mistakes after mistakes after yet another mistake. Everybody have a fair share, and obviously including myself. Coach got really dissappointed and made us sprint like dogs across the breadth of the field, we deserved it though. After say probably 6/7 sprints we resumed the training, once again the team screwed it up quite badly, and it was when he decided to call it a day.

Our teacher in charge, then worked on our fitness since coach got too dissapointed and left early, wasn't very tiring but strained on the hamstring. Perhaps when you run on the field its softer, thus working more on the hamstring when you need to go at a faster pace. Rounds after rounds and did 3 sets of conditioning excercises and that's all for training.

Felt quite bad as i was one of the players who lost concentration etc. So i stretched change, and head home. Boarded the 853 and a little kid and his mother made my day, simple things, yes indeed simple.
The little kid sat down with his mother after they paid for the bus fair, he was desparate to press the bell, and so his loving mother allowed him to do so. Initially, i thought that she shouldn't let him do that since they probably would not alight at the next stop just after boarding but they did, i wronged them for that moment. Anyway, this was not what made my day, i would be a freak if this made my day. He couldn't press the bell as it requires quite some effort to depress the button. So while the little kid was desparately trying to her the bell ring, his mother pressed onto another bell to let that happened, he was elated. How naive is the little kid? 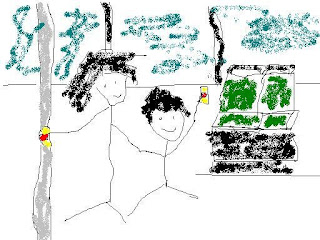 [Give me a some credit for trying to portray the scene =) ]
Posted by Cheung at 9:23 PM